Doing therapy visit work is extremely rewarding. As teams gain experienc, they learn what works best for both the human and the pet. There are many reasons that therapy teams decide to stop visiting, but anyone who has ever done this type of work will tell you that it was time well spent. 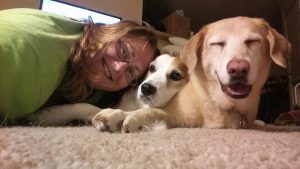 Stephanie started as a therapy dog team with her tri-pod Labrador mix, Emma. Then she rescued Sally, another tri-pod, who easily became a therapy dog. Stephanie moved away from Tupelo, and her new life swallowed up time. Sally lives a leisurely life as she ages. Emma has trotted over the Rainbow Bridge.

Daphnea and Roxy, a Poohealer, became a therapy team in 2009. Roxy’s scruffy bling and warm heart charmed children until she retired. Daphnea says, “I still have the mini leash that I made for the little kids to walk her with while I still had her with the longer lead. My granddaughter uses it to walk her now, without my assistance! Roxy is still so gentle. She’s become such a homebody, doesn’t like going in the car much anymore. She gets so nervous on rides.”

Lola and Sophie are Havanese dogs that teamed with Sylvia and Tom. Lola was a Comfort Creature for 5 years and Sophie for 3 years. When their family moved to Florida, they could not find a group to join so the dogs were retired. Sylvia says, “It was probably one if the most rewarding things I have ever done.”

Paula started in pet therapy because her mother, who was in hospice in Nashville, loved the therapy pet visits there. Paula wanted to give others the joy she saw her mother receive. Paula had a dog at the time who was a great therapy dog. It took a while to find Comfort Creatures and by that time she had gotten Peaches and Sylvester. The cats were so laid back the vets suggested she should use them for pet therapy. Paula learned that there were not many cats that would let just anyone hold them, wrap them in blanket, rock them, or just squeeze and love on them. They joined Comfort Creatures and served for eight years. Peaches and Paula miss visiting, Sylvester does not. He was laid back and sweet but Peaches was everyone’s favorite. When Peaches started to get stressed by visits, Paula knew it was best to stop. 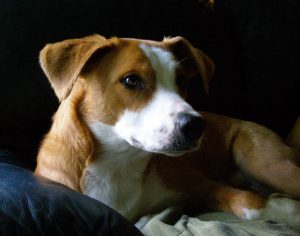 Leala is officially retired, sort of. She was Jane’s first therapy dog, starting in 2009. She preferred the quiet atmosphere of nursing homes. Leala was a dumped dog who was terrified of people for the first six months after she was rescued at seven months old by Jane’ son. Then all of a sudden, she decided that people were wonderful. There is a story about her in Chicken Soup for the Soul: Volunteering and Giving Back. She also has her own webpage, Leala, Sweetest Dog.

Trixie is Sheryl’s third therapy dog. Trixie is of course a rescue dog, along with the rest of Sheryl’s pack.